In line with other fields of its work, FES is supporting Sudanese parties ahead of planned democratic elections after the transitional period. It also aims at supporting trade unions as an important part of organized Sudanese civil society and as a driving force for political and social transformation.

FES is supporting Sudanese parties ahead of planned elections as there is no democracy without strong, independent parties. After decades of an oppressive regime, many former opposition parties are now in a very different position - challenged by the need to actively formulate and implement reform policies. Newly formed parties have been asking for support in terms of internal organization and party program development. Working with partners close to FES’ values of social democracy, the foundation aims at increasing the awareness of the principles of good governance and internal party democracy, including the inclusion of women and youth who were important drivers of the revolution. FES also aims at offering knowledge transfer on how to adjust party platforms and programs as well as how to engage with and represent constituencies in a meaningful and services oriented way.

Friedrich-Ebert-Stiftung is part of the German democratic labour movement and promotes its values abroad. It has been a longstanding partner of the trade union movement in Sudan and engages to improve workers’ rights. The revolution from 2019 has been driven significantly by unions and professional associations many of which have spent a long time in the political underground. FES research during the transitional phase in collaboration with a number of these unions and associations has  brought to light a great number of needs. They range from defining the role of trade unions in society as such to linking unions in with regional and international trade organisations. FES’ objective is thus to make democratically organized trade unions fit for the challenges posed by the new global economic order through trainings and seminars on internal reforms, labourers’ rights, and labour legislation. 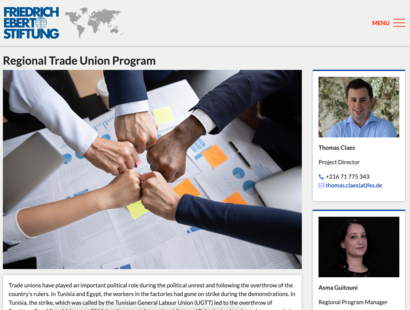 Trade unions have played an important political role during the political unrest and following the overthrow of the country's rulers. Beyond their political role, trade unions play at national level a significant role in economic and social development. They are mostly present all over the country and can ensure that the interests of the employees are taken into account in policy-making. More

The Friedrich-Ebert-Stiftung (FES) is a non-profit German foundation funded by the Government of the Federal Republic of Germany, and headquartered in Bonn and Berlin. It was founded in 1925 and is named after Germany's first democratically elected President, Friedrich Ebert. FES is committed to the advancement of both socio-political and economic development in the spirit of social democracy, through civic education, research, and international cooperation. Friedrich-Ebert-Stiftung is the oldest political foundation in Germany.